According to the International Energy Agency (IEA) wind electricity generation increased by 17% in 2021, up by 55% from the growth in 2020, and experienced the highest growth when compared to other renewable energies. With the steady increase in wind power generation, the likelihood of environmental impacts, albeit much lower than fossil fuel power generation, are becoming more prominent requiring detailed assessments and mitigation. Such impacts can include:

WTGs harness the kinetic energy of wind with minimal direct environmental impacts; however, they still have the potential to result in negative impact annoyance as a result of the shadow flicker phenomenon. Shadow flicker is the frequent, intermittent, and instantaneous casting of shadows from WTG rotor blades as they pass between the line of sight between a receiver and the sun, as presented in Figure 1.

Why is Shadow Flicker Annoying?

People are exposed to fluctuations in environmental light on a daily basis, and humans have evolved to adapt rapidly to these environmental changes. Low light environments result in the dilation of the pupils, allowing more light into one’s eyes, and the opposite occurs in bright environments.

During rapid changes in light experienced with WTG shadow flicker, there is insufficient time for eyes to adjust and the contrast between shadow and light is significant enough to be distracting. A single instance of a shadow flicker will draw one’s attention (like an aircraft’s shadow) but won’t be sufficient to result in annoyance of a receiver. However, multiply this effect by the number of blades and number of revolutions per minute of a wind turbine near residents, and it’s clear that this may be a cause of significant annoyance.

How do We Assess Shadow Flicker Impacts

Shadow flicker assessment should be assessed as part of the planning and permitting process, typically this is done as part of the Environmental Impact Assessment (EIA), either prescribed by the Local Authority and National Guidance, or for financed projects by the IFC Performance Standards [World Bank Group (WBG), 2015].

Initial screening of a WTG site would look to determine if impacts from shadow flicker are likely. The UK’s Planning for Renewable Energy – A Companion Guide to PPS22 Office of the Deputy Prime Minister (2004), prescribes the following:

If initial screening indicates shadow flicker is likely to be a concern, then a more detailed analysis is necessary.

The assessment of shadow flicker impacts can be relatively complex given the operating and geographical variables at play at any given site. Geometrical models such as WindPRO can be used to simulate the annual shadow patterns and calculation of the duration of shadow flicker based on:

Our models are initially developed with the most conservative assumptions including 100% wind turbine operations, 0% cloud cover and worst-case wind direction throughout the year. Thereafter models are refined to account for more localized impact scenarios, taking into account the likelihood of impacts based on typical meteorological conditions in a specific area. 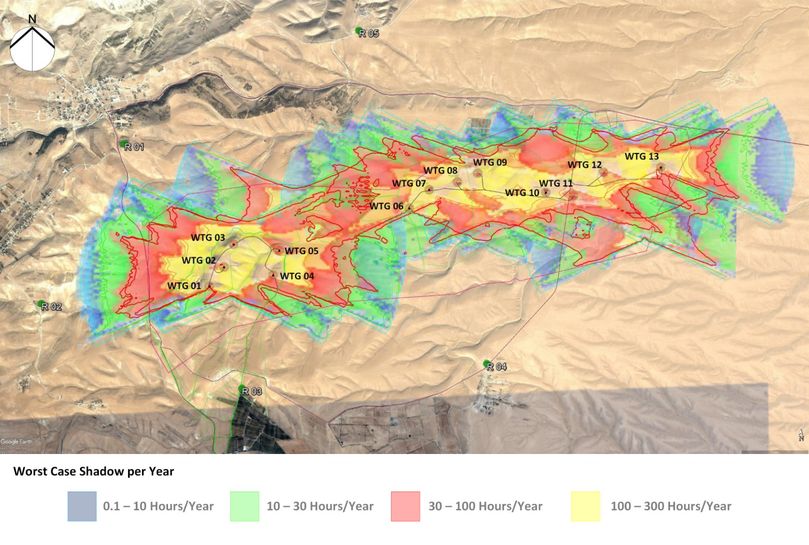 For more information on our WTGs services please contact enquires@wkcgroup.com.