10% of the world’s blanket bog (peatland habitat) is in Scotland, and covers more than a fifth of the land. Given the windy conditions in these upland locations they are also prime locations for planning applications for renewable energy developments.

What to expect in this article;

Blanket Bog, or Peatland Restoration, as it is more commonly known is becoming increasingly common in areas where windfarm projects have been commissioned. This acts to offset the ecological impacts of developments in upland locations, but also is a means of positive management for these sensitive habitats.

With the introduction of Biodiversity Net Gain under the UK Environment Act 2021, there is a mandatory 10% biodiversity net gain requirement for new development projects. It is possible that peatland restoration could be used to offset construction of renewable energy infrastructure, or indeed funded through payment by any new developments that fail to secure the required 10% net gain for biodiversity.

A pristine area of blanket bog in the uplands of Scotland (Credit: Shutterstock)

What are Blanket Bogs?

Blanket Bogs are formed in areas that experience high levels of rainfall and low levels of evapotranspiration, which lead to the accumulation of partially decayed vegetation and can be up to several meters in depth. Blanket Bogs are mainly found in the northern hemisphere and are referred to as “England’s version of the Amazon rainforest”. Blanket Bogs consist of predominantly water, moss, and hollows interspersed throughout. Approximately, 1.6 billion tonnes of carbon are stored in the Scottish peatlands alone – which equates to a third of the carbon held in the Amazon rainforest. This enables the habitat to act as a massive carbon sink, sequestering carbon from the atmosphere and providing a buffer against climate change. 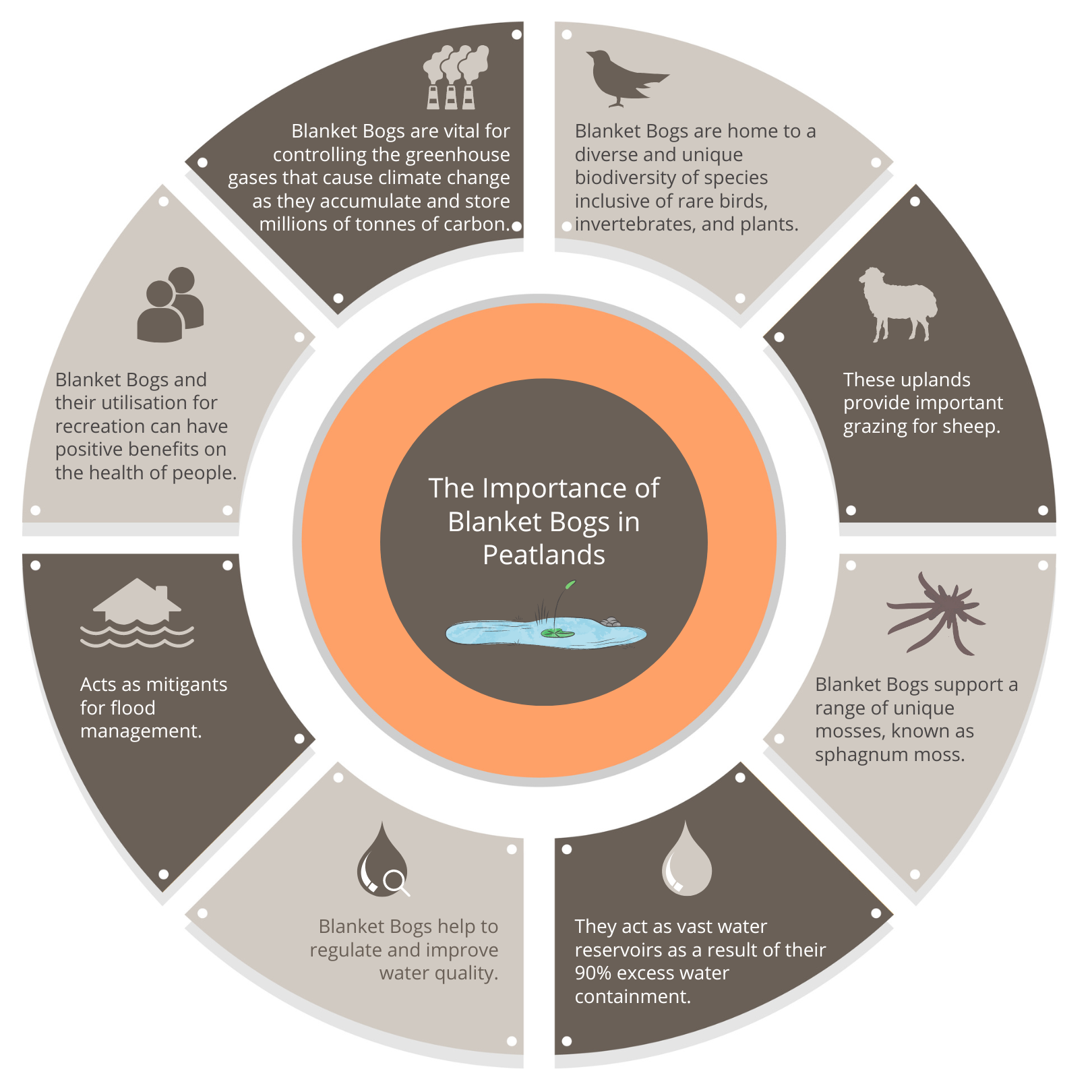 Blanket bogs are globally endangered habitats. Many of which are in a heavily degraded state. Mis-management of the land through burning and overgrazing, as well as natural causes such as wildfires, are causing much of it to erode away. Once the substrate of blanket bogs, peat, is exposed to the elements, it rapidly wears away. This releases carbon into the atmosphere and dissolved peat enters waterways, where it turns clear water into a colour like that of tea. Peat that is dissolved in waterways causes a problem for water companies as they must make significant investments each year to remove the dissolved organic carbon through chemical treatments. Peatland restoration aims to reverse this degradation by establishing the stable conditions necessary for its recovery. 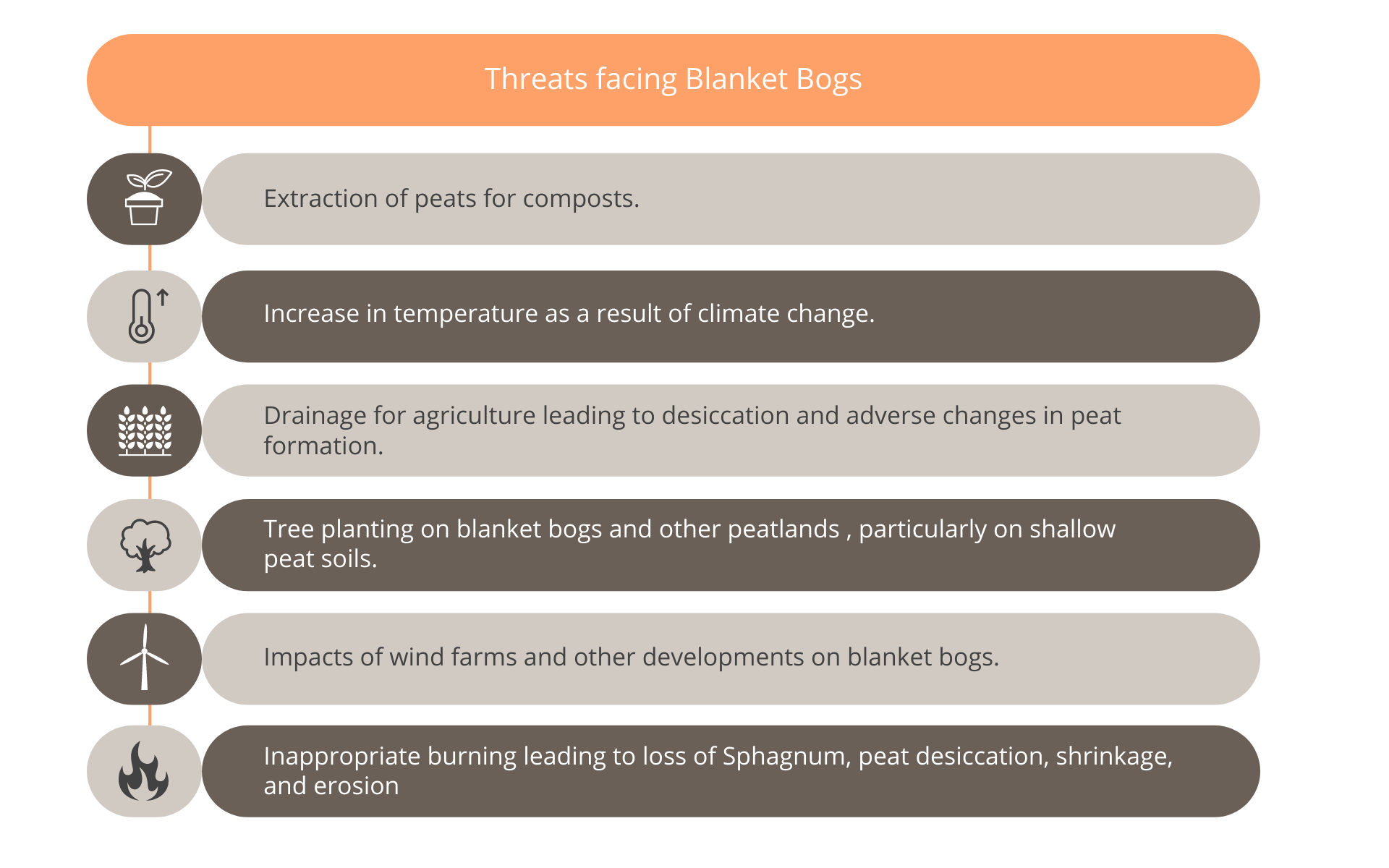 Peatland restoration aims to reverse this degradation by establishing the stable conditions necessary for its recovery. This entails the building of dams and barriers to block drainage channels and erosion gullies. The result helps raise the water table and encourages the deposit of peat sediment behind the dams instead of it being carried off into the waterways.

The sides of gullies that are suffering erosion are often too steep for re-colonisation by vegetation. To aid in recovery, gully sides are reprofiled to a shallower angle before bare peat revegetation is carried out.

Re-vegetation techniques are used to stabilise the peat and allow colonisation by natural bog species. This includes the application of lime to raise the soil pH, organic fertiliser to support root establishment, and seeding with amenity grass to act as a nurse crop. A variety of techniques are being trialled to reintroduce sphagnum mosses to blanket bogs.

In the second part of this series, we will describe how geospatial technologies can be used to aid in habitat restoration, with particular attention to how data captured using drone technology can be used for analysis.

From the use of satellites to drones, global positioning systems (GPS) and rugged field survey tablets, photogrammetry, machine learning and data science, we offer a refreshingly modern approach to our environmental consultancy work.