In addition to WKC’s registrations to work within the Saudi Arabian Royal Commission Cities (industrial cities of Jubail and RAK), WKC Group is pleased to announce that we are one of a handful of companies to gain the NEOM Pre-Screened Environmental Consultant status (Appendix B of NEOM – EN – PRC – 016). This pre-screening by NEOM allows WKC to provide environmental services within the NEOM development and ensures that Environmental and Social Impact Assessments (ESIA’s) undertaken for NEOM projects meet the highest possible standards including those adopted by the International Finance Corporation (IFC).

NEOM is a national giga-project supported by  the Public Investment Fund of the Kingdom of Saudi Arabia with the vision of steering Saudi Arabia into a new economic era, with a net-zero carbon emissions by 2030 and ultimately net-positive climate impact. The bold vision of NEOM includes a deep commitment to environmental protection and nature conservation through a comprehensive network of protected areas and urban developments that set new benchmarks in sustainability and liveability.

The urban development areas, confined to 5% of the total area of NEOM, will provide the foundation for future-focused communities driving the evolution of a range of sectors, including:

NEOM will include towns and cities, ports and enterprise zones, research centres, sports and entertainment venues and tourist destinations, with a focus on sustainability through comprehensive and innovative approaches to conservation.

The NEOM region is in the Tabuk Province, in the northwest of Saudi Arabia on the Red Sea and Gulf of Aqaba coasts, covering 26,500 km2 and extending 460 km along the Red Sea coastline. NEOM has ambitious environmental, social, economic and cultural objectives, with Phase 1 (known as ‘The Line’) that was launched in early 2021.  ‘The Line’, spanning 170 km in length, will be the first residential precinct of its kind in the world and is expected to host between 1 and 5 million residents and preserve 95% of the existing environment with no cars, streets or carbon emissions.

NEOM will also rely on sustainable energy to fulfil 100% of its energy needs, as it has unparalleled potential from solar and wind energy that will be used to develop the latest and most innovative energy systems, with the aim of producing 18 gigawatts of renewable energy by 2030.

In order to meet its environmental objectives, NEOM has developed the NEOM–ENPRC-016 Regenerative Developments Procedure. The procedure mandates that a pre-approved independent environmental consultant needs to be appointed for all applicable NEOM Development projects. The Environmental Consultant should be engaged to support planning and design, undertake an independent assessment of the environmental and social risks associated with the development, prepare management and monitoring plans and to provide assurance and monitoring during construction, and in some cases operations. WKC was successful in obtaining the “Pre-Screened Environmental Consultant” status, after showcasing our decade long track record of ESIA within the KSA, and our team of regionally based, experienced and qualified environmental consultants.

To date WKC has worked on the following projects within the NEOM development, which includes renewables, residential, transport, waste management, and ecological surveys: 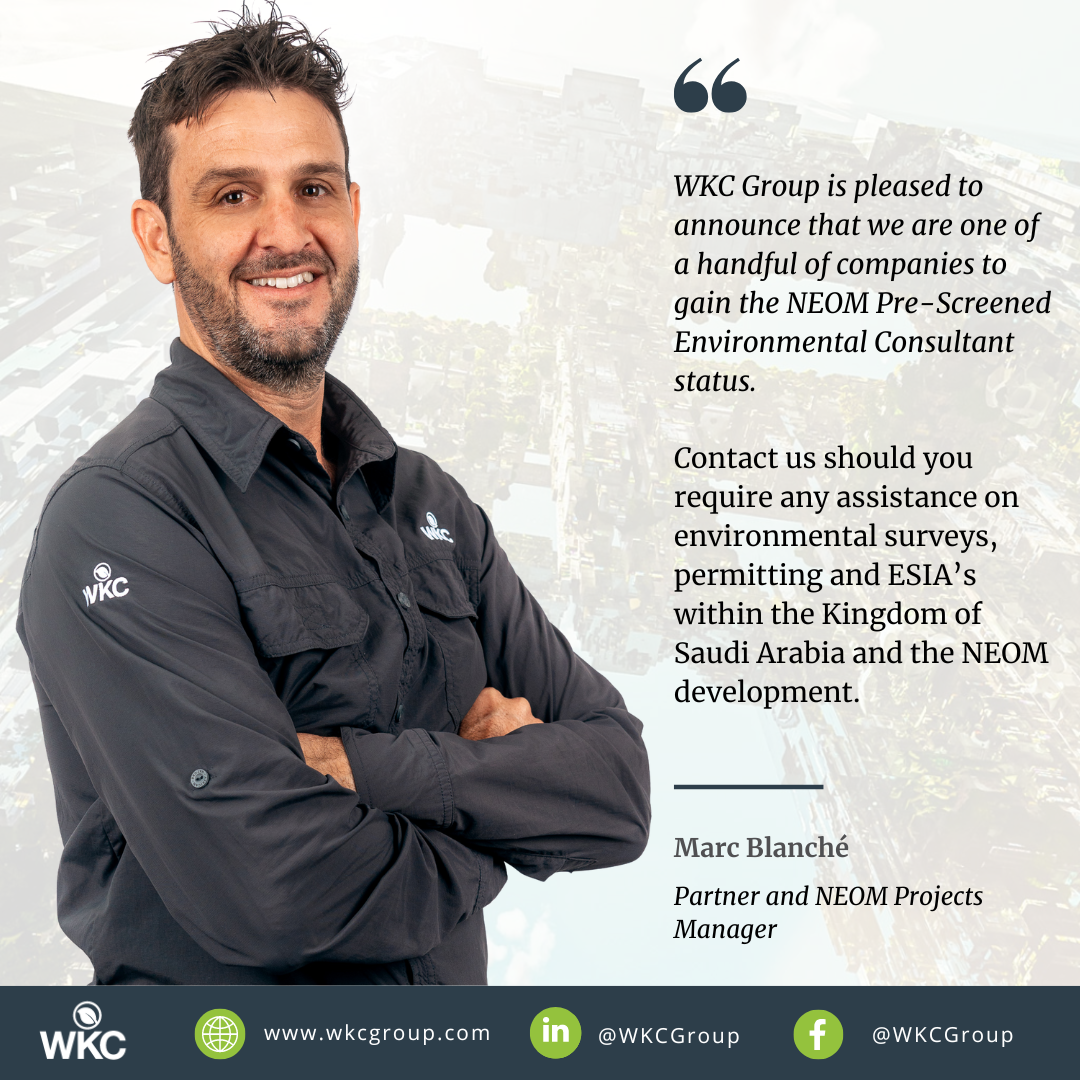