Coral reefs are known to be the “rainforests of the ocean“. They are among the most diverse and productive ecosystems found on the planet. Coral reefs are a vital part of the marine ecosystem that provides habitat for approximately 25% of all marine life and over 4,000 species of fish, despite only covering 1% of the ocean floor. Approximately half a billion people depend on the coral reef ecosystems for coastal protection, a source of food and income from tourism and fisheries. 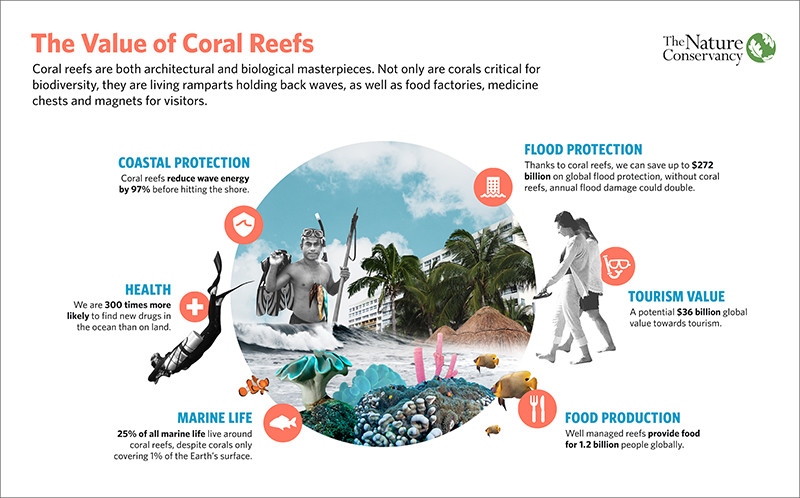 What Are Coral Reefs?

Coral reefs belong to the class Anthozoa in the animal Phylum Cnidaria, which includes sea anemones and jellyfish. However, unlike sea anemones, corals secrete hard carbonate exoskeletons that support and protect . Most coral reefs are built from stony corals, whose polyps (the soft body) cluster in groups, and reefs are formed by colonies of coral polyps that are held together by calcium carbonate. There are three types of coral reefs – fringing reefs, barrier reefs, and atolls.

Corals can be found throughout the world’s oceans, in both shallow and deep water. However, the reef-building corals are only found in shallow clear waters that provide light to the symbiotic algae that live within the corals tissue. The symbiotic algae, called zooxanthellae, give the corals their colourful hues and provide them with a source of food. Stony corals also require tropical or subtropical temperatures, which exist in a band 30 degrees north to 30 degrees south of the equator.

WKC Group’s team of marine experts has participated in the identification, classification, and protection of extensive areas of coral reef, a small selection of which is provided below.

Dredging is often an element of coastal zone and subsea infrastructure development, the expansion of which is an economic and socio-cultural necessity. In the marine environment it is a technique used to reshape coastline, beach nourishment, create artificial islands or remove sediment which builds up on the ocean floor for the purposes of clearing pathways for ships, create space to construct infrastructure such as ports or to bury subsea pipelines and cables.

How could Dredging affect Coral Reefs?

Dredging activities tend to disturb sediments increasing turbidity and sedimentation. These impacts have led to the loss of coral reef habitats in many cases, either directly by removing or burying reefs, or indirectly by causing fatal or significant stress to corals as a result of increased turbidity reducing sunlight available to the corals and sedimentation which smothers polyps.

Impacts of Sedimentation on Coral Reefs

Ongoing sedimentation generates high sediment conditions for months to years which places a strain on corals biological functions (feeding and reproducing), exhausts their energy reserves, and hinders their adaptive responses. Sedimentation leads to an accumulation of rejected sediment which results in coral death due to the energetically costly process of removing sediment – corals become partially or completely buried. The process of dredging may release sediment and unwanted contaminants from deeper levels of the sea floor which leads to acidification and/or eutrophication (which is the enrichment of seawater leading to the rapid growth of algae). Larval settlement also is directly impacted by sedimentation as a result of a reduction in available recruitment space. This, coupled with the blocking of photosynthetically active sunlight is also likely to kill newly settled coral recruits and other benthic organisms. 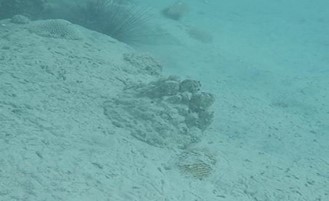 Impacts of High-Turbidity on Coral Reefs

Dredging sediment is more fine-grained than natural sediment and causes higher turbidity which means that the corals access to light is reduced significantly. Low light levels inhibit the photophysiology of algal symbionts which leads to calcification, coral starvation, and reduced growth. This fine sediment has an adhesive, clay-like texture which is more resistant to bioturbation and dissipation. An elevated level of turbidity causes stress which makes corals susceptible to disease causing them to expel the symbiotic algae and go white. This is known as coral bleaching and can be fatal to the corals as they are not receiving the additional food resources from the algae. 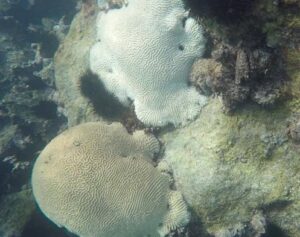 Protection of Coral Reef from Dredging

A critical first step in the protection of coral is the establishment of its prevalence within the vicinity of dredging. This is often conducted by a marine environmental baseline survey conducted through diving, drop down camera, remote operated vehicle operation or remote sensing.

Once the prevalence and value of coral has been established, forecasts on the impact of dredging can be explored using a mathematical model (known as dredge plume modelling) which simulate the transport and deposition of suspended sediment.

Inevitably, and no matter how small the risks are, impacts to coral health may be predicted by coral mapping and dredge plume modelling. Fortunately, there are a number of well-established techniques to minimise or even remove impacts of dredging.

Most measures for the protection of coral reef aim to minimise the levels of sedimentation and turbidity. The best technical protection measures include utilising appropriate types of dredging equipment, having control over leakage, propeller wash, and sediment spill, the use of an environmental valve and silt barriers, relocating the dredge when necessary, and conforming environmental ‘windows’. These steps can also be complemented with compensation measures such as propagation to produce new coral colonies which can offset potential impacts. Sound strategic planning for coastal development projects, such as Environmental and Social Impact Assessment (ESIA) is a key tool for coral reef ecosystem management and conservation.

Coral translocation can be also used as a protection measure to remove living corals from an area which may be affected by dredging to a new, protected site, as well as the introduction of corals to newly developed area and artificial reefs. Prior to translocation, a receptor location must be selected that has similar environmental conditions as the donor site and approved by the local regulatory authority. Environmental factors to be considered include depth, temperature, salinity, turbidity, and water movement.

Divers harvest the corals from the donor site using a hammer and chisel. The corals are placed in a crate and brought to the surface where they are placed in containers filled with seawater. The corals are transported to the receptor site and placed into crates and lowered into the sea. Divers will then attach the corals using an epoxy glue or underwater concrete. The corals are tagged, photographed, and measured and the information will be used for subsequent monitoring. 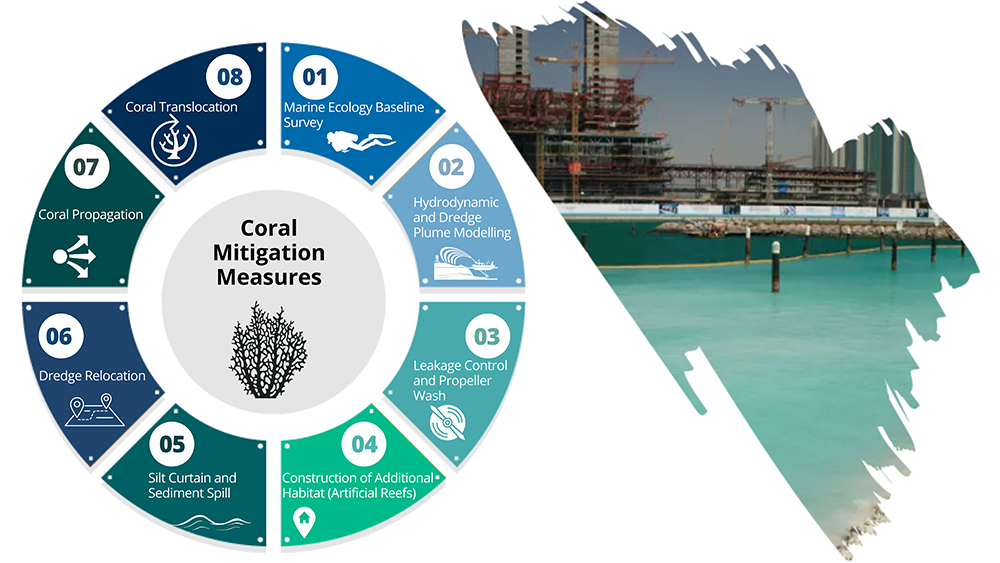 In summary, coral reefs are not only critical habitat offering significant marine biodiversity but offer important social benefits which should not be overlooked. Fortunately, there has been significant recognition of the need to protect coral in recent years whilst recognising that dredging is an often-essential part of the programme of economic development of the built environment.

With appropriate coral mapping, predictive dredge plume modelling and the application of one or a number of measures to reduce sediment transport and deposition, protection of coral reefs can be highly effective. Offsetting potential impacts can be further advanced with the creation of artificial reef as well as the innovative mechanism of translocating it to a receptor site which can be afforded long term protection.