Wildlife cannot be manufactured. And once it’s gone, it cannot be replenished. Those who profit from it illegally are not just undermining our borders and our economies, they are truly stealing from the next generation.
Hillary Clinton

Wildlife Conservation Day, celebrated on the 4th December, seeks to raise awareness, reflect, and act against threats facing endangered fauna and flora globally. A study conducted by the United Nations (UN) shows that approximately one million animal and plant species are now facing extinction – many of which have been predicted become extinct within decades.

What threats does Wildlife face?

Wildlife on Earth is under siege. Some of the biggest threats to wildlife include climate change, habitat destruction, poaching, pollution, and illegal wildlife trade. 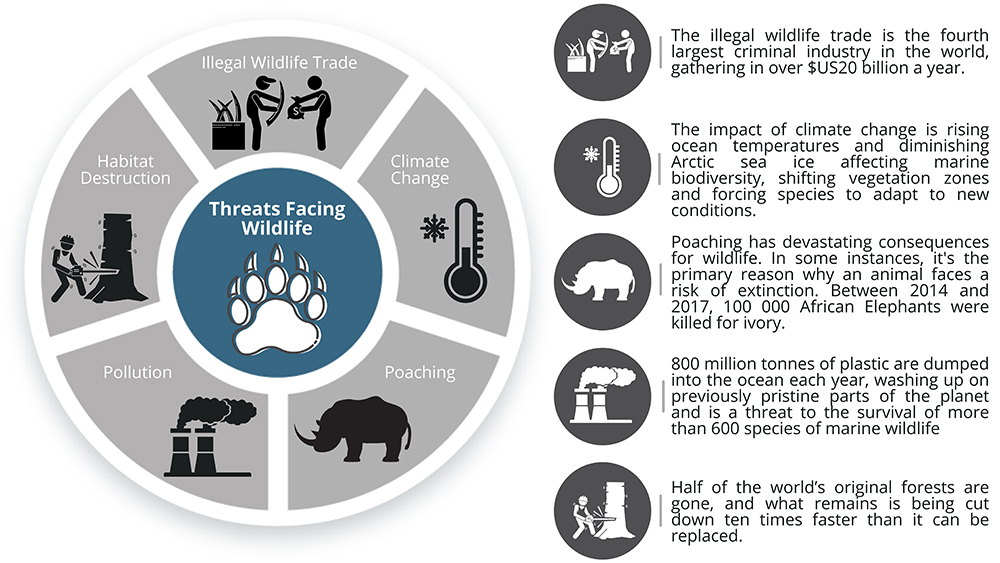 In addition, criminal activities are driving species to extinction. ‘Wildlife crime’ refers to the taking, trading (supplying, selling, or trafficking), importing and exporting, processing, possessing, obtaining and consumption of wild fauna and flora, including timber and other forest products, in contravention to national or international law.

Within the past five years, just a few of the animals which have become extinct in the wild are provided below.

The impact of wildlife crime include the alteration of livelihoods, ecosystem imbalance due to over exploitation, invasive species, and the incidental killing of non-target species.

By trying to protect wildlife, park rangers are also targeted and killed on a regular basis by poachers. Unscreened wildlife and wildlife parts that are illegally imported / exported also increase the risk of human health pandemics such as bird flu.

Identified below are 10 wildlife species which are in critical danger of extinction due to wildlife crime.

There is almost a unanimous opinion that preventing, even reversing the impact of human activity on wildlife is worth fighting for, but is enough being done to prevent species extinction? Wildlife Conservation Day raises awareness to all and focuses on putting an end to wildlife crime.

If we can teach people about wildlife, they will be touched. Share my wildlife with me. Because humans want to save things that they love.
Steve Irwin

How Can We Protect Wildlife?

Exploitation of habitat and species as a result of consumer behaviour has a direct impact on the extinction of animals and habitats. Communities situated in areas where there is exposure to endangered species and habitats often depend on these species for livelihood and commercial purposes. Therefore, strategically focusing on making environmentally friendly product and recreational choices will help conserve many endangered species that share their habitats and are vulnerable to extinction. Below are some ways in which this can be achieved.

Educating people about the threats faced by threatened and endangered species is critical to wildlife protection and a key objective to Wildlife Conservation Day. Steps that individuals make have a small but positive impact on wildlife conservation. Such measures applied on a global scale by consumers, however result in benefits which are far more tangible. For example:

Eco labels cover a wide range of considerations. A few of which can be found HERE

WKC Group actively engages in conservation efforts which is at the core of our daily working lives. For example, our ecologists have recently conducted Socotra Cormorant surveys in Deira Island. The Socotra Cormorant is a threatened species of cormorant that is endemic to the Arabian Gulf and the south-east coast of the Arabian Peninsula. Coastal developments, marine pollution, and disturbance near nesting colonies are causes for the endangerment of the Socotra Cormorant species.

In summary, Wildlife Conservation Day is a programme aimed at raising awareness that small actions taken on a global scale can prevent or even reverse the effects our footprint is having on natural ecosystems worldwide. Ironically many initiatives require little effort and consumer bias has the critical secondary effect of seeing a predictable change in corporate attitudes towards consumer demands and the products they make.

For more information related to WKC Group’s initiatives related to ecology see the links below: