Across the UAE there are approximately 3,000 hectares of mangrove forests [1], with many more thousands of hectares across the wider Arabian Gulf region. In a region where the desert and sands constitute much of the landscape, coastal mangrove forests are a real treasure, sometimes referred to as “green lungs” and “ecosystem engineers”.

Mangroves act as natural barriers against ocean waves, protecting the coastline from tidal currents and storms.  The roots of mangrove trees can trap sediments, stabilising the coastline and preventing erosion. Protective groynes and breakwaters have had to be deployed in many areas across the region that have lost mangrove’s protective qualities to avoid sand being washed into the sea and erosion of the coastline.

Mangrove trees also provide important nursery grounds for a multitude of organisms including fish, sharks, rays and invertebrates, many of which have commercial as well as conservation importance providing a highly productive ecosystem. Primary production from the mangroves or associated algae fuels an extensive food chain. Mangrove leaves can be broken down by micro-organisms or bacteria into useful minerals or eaten by the variety of insects, crabs and mammals which in turn become sustenance for various predators. 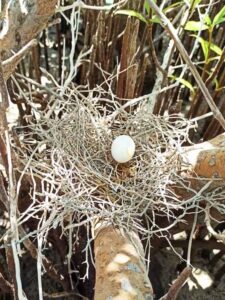 The egg of a collared dove, nestled in the middle of a mangrove forest

The coastal ecosystems of mangroves, tidal marshes and seagrass meadows store significant amounts of so–called coastal “blue carbon”. This term refers to carbon that is captured from the atmosphere and stored below the groundwater level [2]. These ecosystems are said to store more carbon per unit area than terrestrial forests [3], perhaps playing a role in combating climate change.

Mangroves can survive the extreme climatic conditions of the Arabian Gulf region including high temperatures, high salinity and intense UV exposure growing where few other trees can! These trees can accumulate and excrete salt in their roots and leaves to survive in the local marine environment [1]. Unlike terrestrial trees, whose seeds usually begin germinating after falling on the ground, mangrove seeds start this process while still on the parental tree [4]. This ensures a higher chance of successful rooting in tidal environments. The seedlings fall into the water and the water transports them to find a suitable environment to grow further. The seedlings can stay alive in water up to 3-4 days [5]. Despite such resilience, mangrove forests are depleting and under threat from climatic changes and perhaps more significantly, anthropogenic disturbances such as coastal development and pollution. 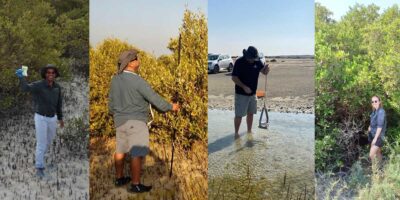 WKC is working with developers to minimise disturbances to mangrove trees, provide continuous monitoring and developing site specific management plans. While carrying out mangrove surveys the WKC team typically focusses on the overall density of the forest, recording such data as height, crown diameter, seedling counts and general health of the trees.

WKC’s team of experts in earth observation technology use data captured by satellites to accurately map the extent and health of mangroves. By employing contemporary machine learning techniques mangroves can be mapped to a high degree of accuracy. Chlorophyll content in the leaves of mangrove trees can be determined from space. The greater the amount of chlorophyll the healthier the tree is. This can be assessed using remote sensing techniques such as the Normalised Difference Vegetation Index (NDVI).

A false-colour near infrared (Near Infrared, Red, Green bands) composite of WorldView-2 data at 40cm resolution and results of NDVI analysis.

Combining advanced mapping technology together with our ground surveys and local expertise, WKC can produce very detailed and informative survey information to developers, regulators and other interested parties.

As one of the leading experts of mangrove habitat in the region, WKC were instrumental in establishing and managing a unique, mangrove nature reserve in Abu Dhabi. The park offers members of the public the opportunity to witness and enjoy these wonderful trees safely, and to be able to learn more about their environmental importance.

We cherish our environment because it is an integral part of our country, our history and our heritage. On land and in the sea, our forefathers lived and survived in this environment. They were able to do so only because they recognized the need to conserve it, to take from it only what they needed to live, and to preserve it for succeeding generation. – Sheikh Zayed

Beautiful scenes at a Mangrove Park