There have been significant changes and restructuring within some of the regulatory bodies responsible for enforcing environmental laws, regulations, and permitting systems within Saudi Arabia. Whilst the regulatory environment remains fluid, a summary of recent changes is described on the following pages.

General Authority of Meteorology and Environmental Protection (GAMEP): GAMEP has essentially been disbanded and is no longer considered the key environmental regulatory body outside of Royal Commission (RC) jurisdictions or certain areas governed by Saudi Aramco. The responsibilities previously held by GAMEP, through Environment Law issued by Royal Decree No. M / 165 dated 11/19/1441 AH, and Cabinet Resolution No. 729 dated 16 / 11/1441 AH, as of 13th January 2021, have been distributed between the following five centres:

All five centres are considered to be branches of the overarching authority of the Ministry of Environment, Water and Agriculture (MEWA). As per Royal Decree M/165 dated 11/19/1441 AH, MEWA is now the designated environmental authority in Saudi Arabia.

The NCEC is responsible for issuing permits to construct and operate to all developments including industrial, agricultural, commercial, water and energy, mining, and development projects (excluding those facilities being developed or modified under the industrial cities of Jubail, Yanbu, Ras Al Khair and Jazan).

The NCEC are also tasked with:

For new projects / developments, outside of the RC jurisdiction and not governed by Saudi Aramco, a submission to the NCEC as the primary authority is required, which for major projects normally requires an Environmental Impact Assessment (EIA). Registration as an EIA consultant consistent with the requirements historically enforced by GAMEP is understood to continue to be a requirement for EIA consultants with the NCEC.

The NCEC has published certain regulations in Arabic. As the NCEC is fairly new as a body, new regulations are expected to be released and made available in due course.

The NCWM is tasked with issuance of environmental permits for industrial waste management activities which include recycling, disposing, transporting and other activities related to waste management. Depending on the project type and associated activities, a development may require a permit from both the NCEC and NCWM. The applicable waste and waste management regulations are yet to be published by the NCWM.

The National Centre for Meteorology monitors weather while also issuing forecasts that may cause harm to ensure the safety of welfare and people and property. The centre is also working towards assessing and making optimal use of the country’s natural resources and monitoring of weather patterns.

The National Centre for Wildlife has the key responsibility of protecting and sustaining terrestrial and marine wildlife by implementation of programmes to address and reduce threats and to rehabilitate endangered species and important ecosystems.

Royal Commission for Jubail and Yanbu (RCJY): The RC’s RCER-2020 regulations have not yet been enforced. It is understood that the regulations are still undergoing consultation and review, and an implementation date will be put forward once the process has been completed.

The team at WKC Group has developed a ‘mind map’ which we hope clarifies the various regulatory bodies within Saudi Arabia as well as their jurisdiction and responsibility for issuance of environmental permits. 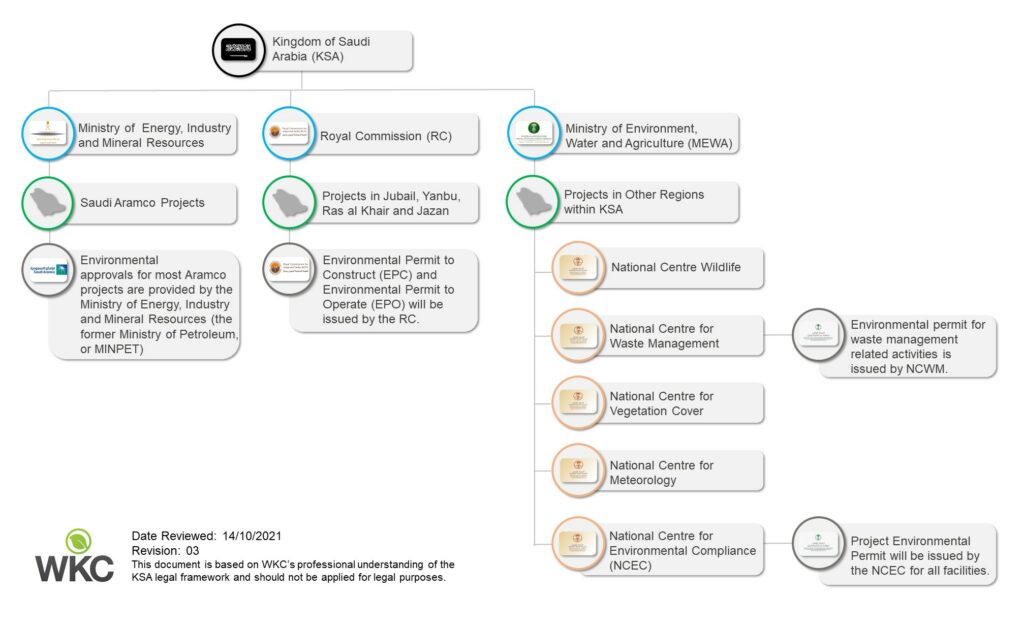 WKC Group will keep you posted through this newsletter on emerging regulatory changes in KSA, the Middle East and Africa. Contact us at enquiries@wkcgroup.com for further information or support with project permitting within Saudi Arabia.